Holiday Shoppers Are Worried That High Prices Will Make It Harder to Buy Gifts; Many Will Take On Debt To Make up the Difference, New Financial Stress Study Shows

Survey findings from Beyond Finance, a national leader in debt resolution, reveal that acute financial stress caused by inflation may deflate holiday cheer.

Purpose of the Financial Stress Survey

With inflation hitting a 40-year high this year and many Americans struggling economically, the Beyond Finance team surveyed consumers and found that many of them are falling into debt and having difficulty finding their way out.

This troubling trend aligns with data from the Federal Reserve Bank of New York which shows that credit card balances experienced their largest increase in more than 20 years in the second quarter of 2022, and overall household debt jumped to $16.2 trillion, an all-time high.

In this environment, the approaching holiday season presents unique challenges for consumers, financially and emotionally. We wanted to know how Americans prepare for — and feel about —holiday shopping in the context of high inflation and increased financial stress. Working with the third-party survey platform Pollfish, we asked 1,081 U.S. adults to share their thoughts and plans.

Here are the results of that financial stress survey.

More Americans are worried about being able to afford holiday shopping this year, largely as a result of inflation concerns.

Many shoppers contacted through this financial stress survey made clear that they are approaching the holidays with trepidation because of inflation. In most cases, these consumers have also already adjusted their holiday spending plans, which they directly attribute to inflation. 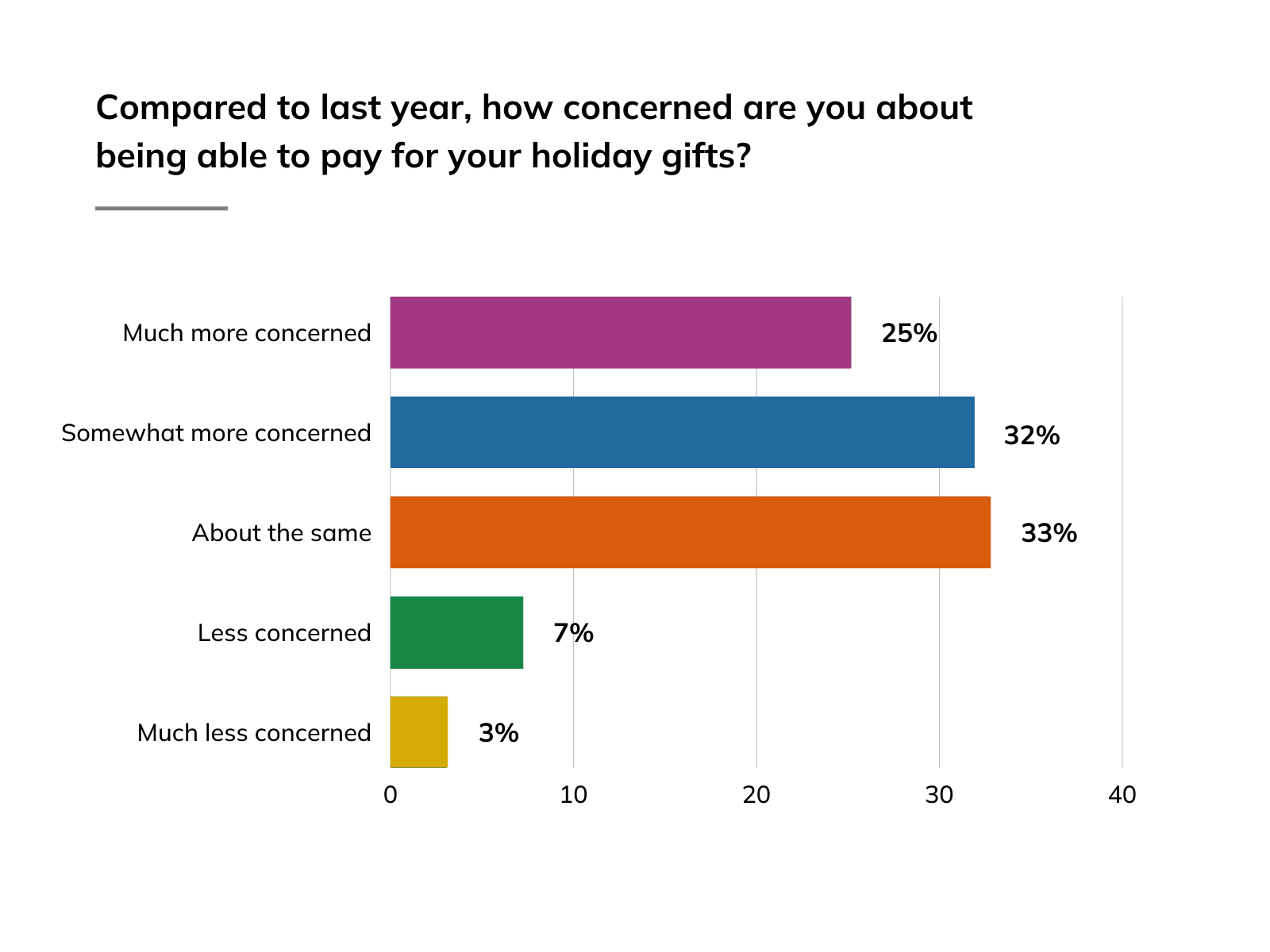 Respondents attributed their concerns to various personal factors — mostly higher prices. When asked, “Have any of the following factors forced you to reduce your planned holiday spending for this year?” 60% cited inflation, while others cited job loss, medical emergencies and unexpected expenses, such as car and home repairs.

Holiday shoppers expect to rely more on credit cards this year because of rising costs.

Half of those surveyed said they would be using credit cards to fund the majority of their purchases, with many attributing this to finding themselves in a more challenging financial position than last year. Respondents were split evenly when asked whether they expected holiday shopping to have a negative effect on their financial health.

More than half of respondents (57%) said they planned to primarily pay for their purchases through one of the following methods: credit cards (50%), “buy now, pay later” offers (6%), or loans/cash advances (1%). 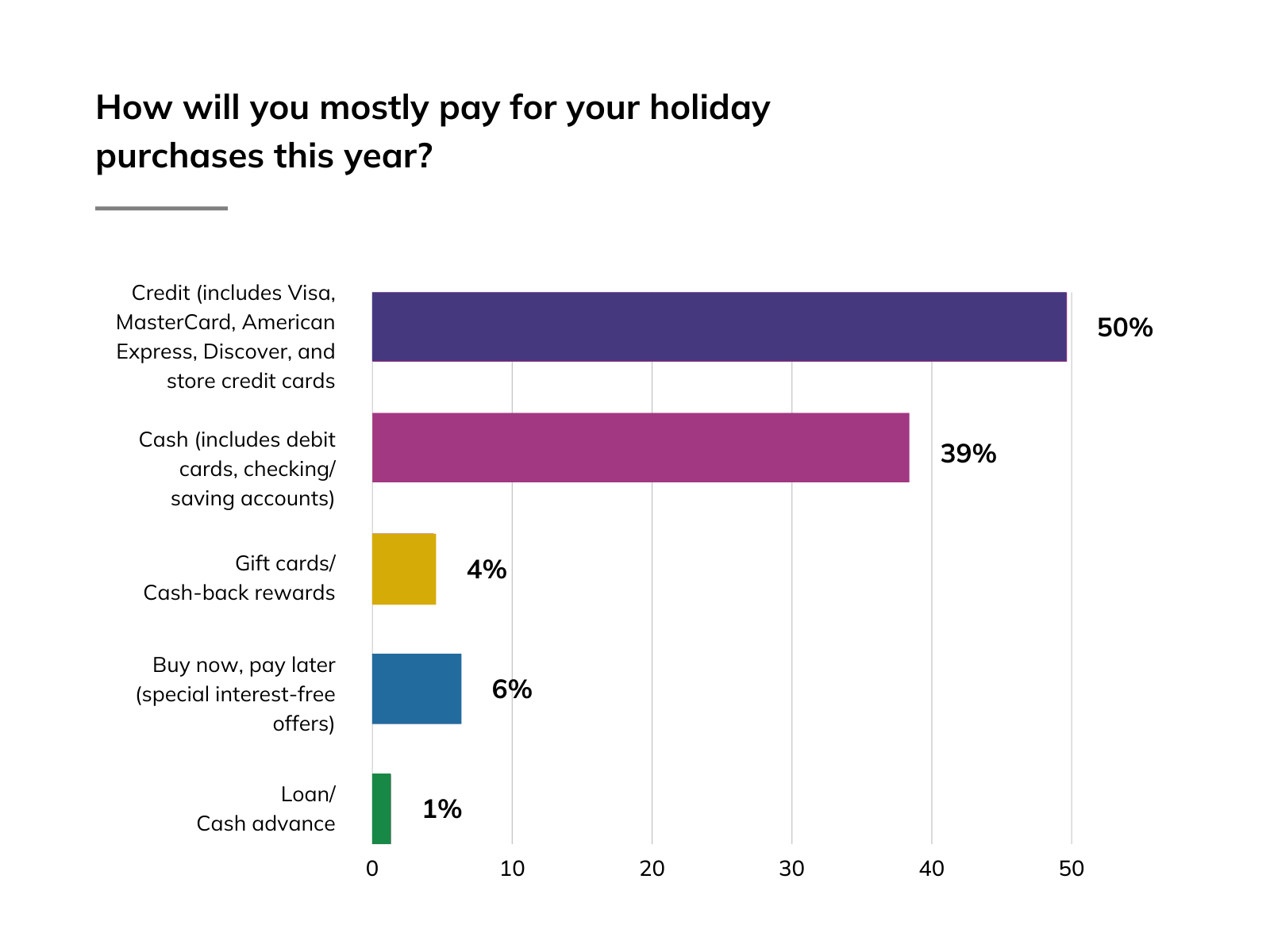 Most consumers believe that shopping will have a negative effect on their holiday spirit this year.

Holiday cheer may be in short supply for those struggling with holiday spending — these survey results clearly show that financial stress affects consumers’ financial and emotional health. 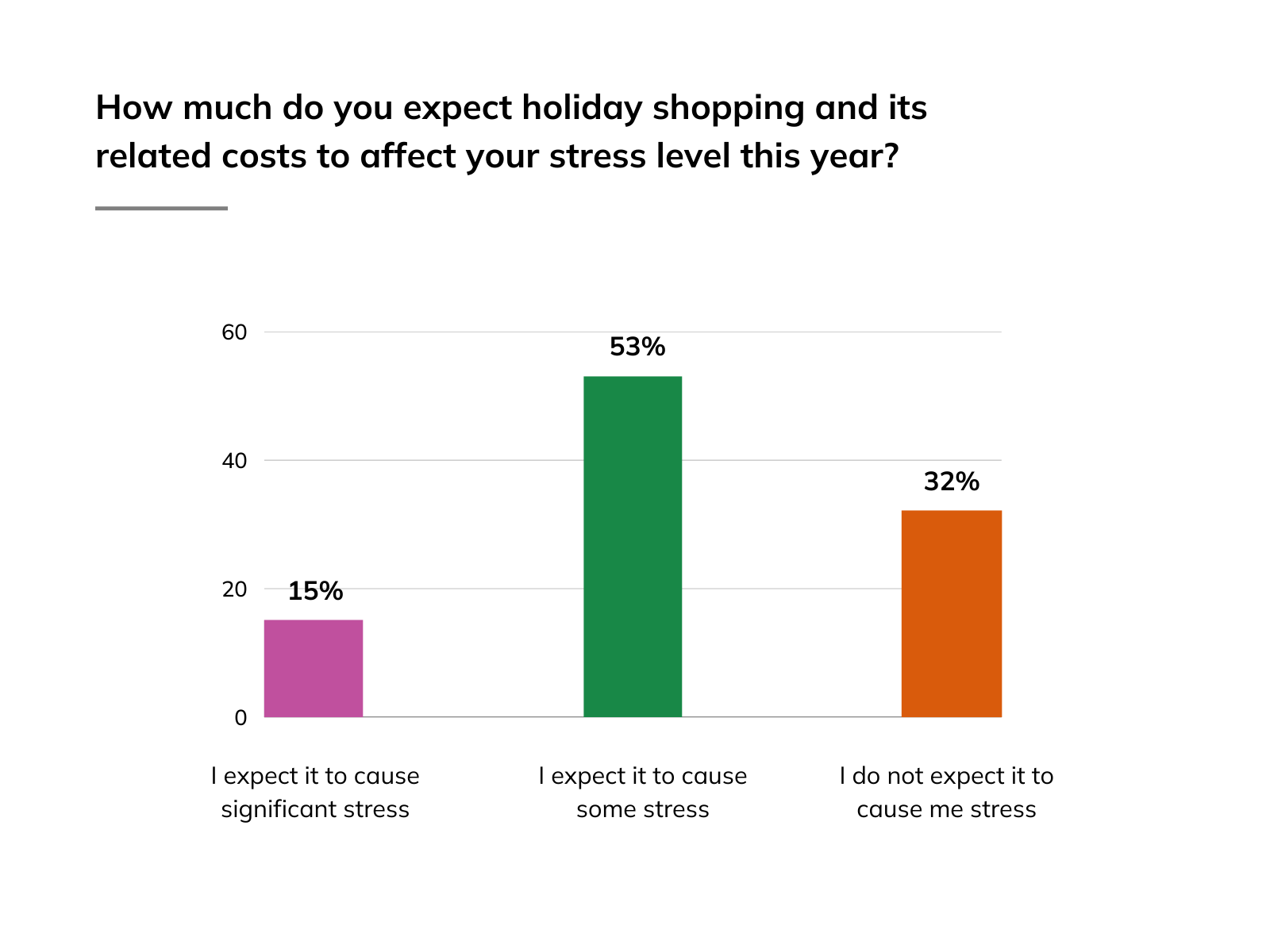 Those already in significant debt have the biggest worries, but also struggle the most with breaking the cycle of overspending.

One of the most troubling findings in this study is that consumers who are most in debt and relying on credit cards plan to spend more this year than those in a better financial position. 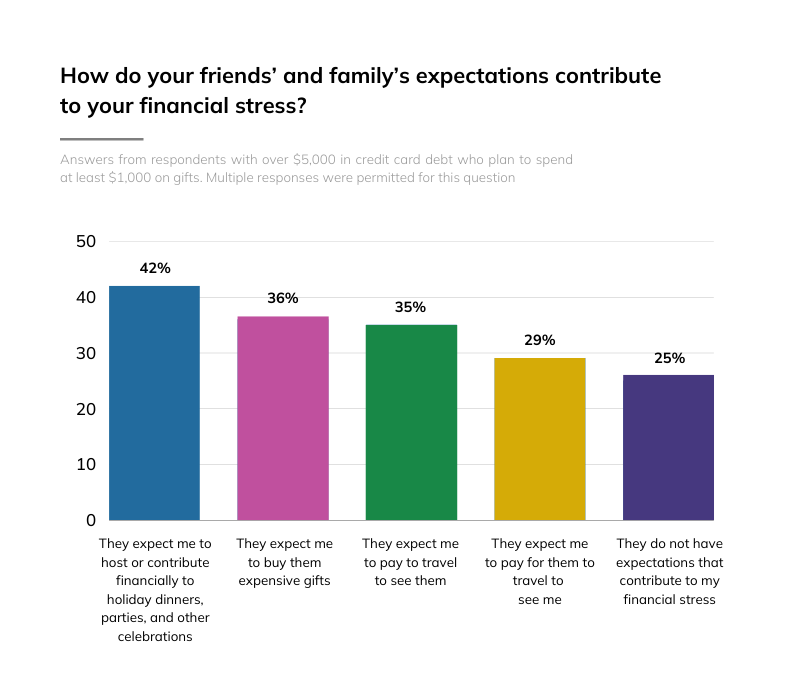 When asked, “Are you worried that your holiday shopping will have a negative effect on your financial health?” almost two-thirds (66%) of respondents with more than $5,000 in credit card debt confirmed they were, compared to 34% who were not worried. 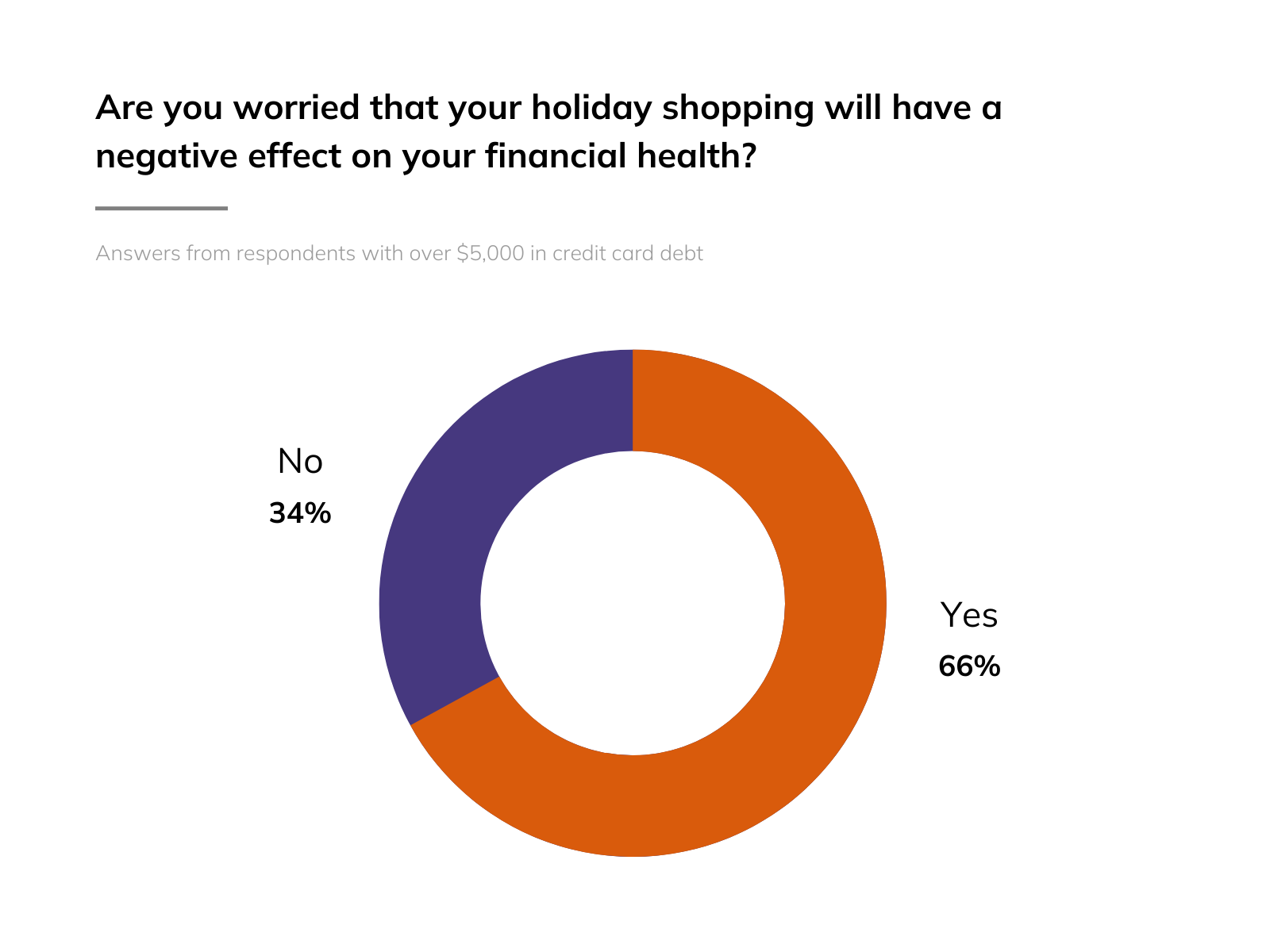 The demographic most likely to be stressed out and heavily in debt turns out to be men between 35 and 44. Among this group, 58% have more than $5,000 in credit card debt, compared to 43% of all respondents. Among the men in this age range with any credit card debt, 42% said they feared that holiday shopping and associated costs would spoil their holiday completely.

We also found on the financial stress survey that consumers who are less burdened by debt and who plan to use mostly cash and debit cards to shop this year are poised to enjoy a much more joyful holiday season.

Beyond Finance used the third-party survey platform Pollfish to conduct an online financial stress survey of 1,081 U.S. consumers with an annual household income over $25,000 — including 925 (86%) who said they planned to spend at least $250 on holiday shopping — on Aug. 15 and 16, 2022. Researchers reviewed all responses for quality control.